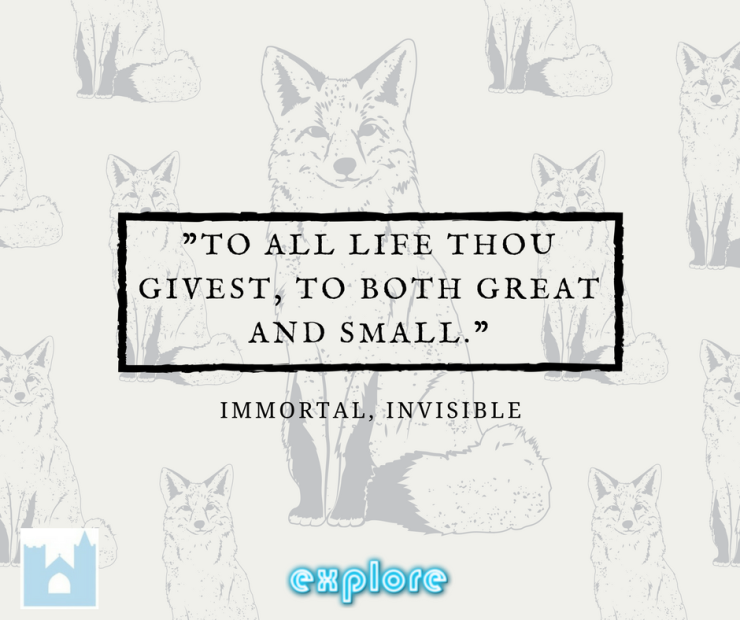 RG Huff, writes in his blog:

Let me just say that I love the hymn Immortal, Invisible. I think I would never tire of singing it in worship. The sturdy 3/4 pulse and the powerful text always resonates with me as the words trip over my lips. Within this hymn are some great lines, but I’ve chosen this one to deal with today.

This line always reminds me that God is no respecter of persons. He makes the sun and rain to fall on the just and the unjust… the important and the seemingly insignificant. He gives life to all despite their ‘place’ in the world order… the great and the small. Having always considered myself on the of-lesser-importance end of the spectrum, this line inspires me.

During his earthly adventure, Jesus found himself visited by lowly shepherds and by wealthy men from the Far East; sitting with the highest officials in his religion, lawyers, government officials; working in the lives of city leaders, lepers and other outcasts; walking tall among the greatest people of his day, and stooping to be on the level with the sinningest sinners; standing in the Temple preaching and praying, and later letting children sit in his lap. He was an enigma for certain – a conundrum for those who tried to figure him out.

He still is a paradox. His ways are still a mysterious ‘puzzlement’ (to quote Yul Bryner). He is still giving life to both ends of the social spectrum – giving breath to all who require it to stay alive… and giving his redeeming Spirit to those who wish to stay alive forever.

You know those sticker things people put on the back window of their van to represent the family inside? That pretty much says it all so far as who is acceptable in God’s family! The next time you pull up behind one of those sticker-clad MPV’s in traffic, be reminded that God gives life to both great and small… even you!