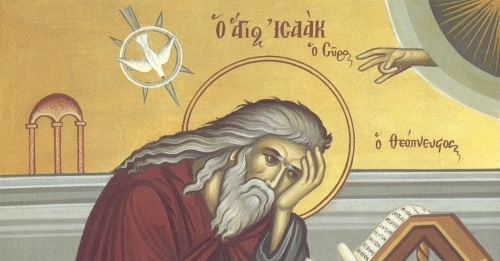 One popular belief among Christians across many traditions and denominations is that hell is a place where the wicked experience pure punishment and where the love and mercy of God no longer restrains the justice of God.  St Isaac the Syrian (613-700), a bishop and theologian from Nineveh, strongly disagrees with these ideas.  St Isaac emphatically declares to “not call God just.”  Why so? What about 2 Thessalonians 1.6, which states that “God is just: He will pay back trouble to those who trouble you”?  For Isaac, it is mercy, not justice, that describes God’s attitude towards humanity.  In fact, he goes so far as to say that “Justice (or rectitude) does not belong to the Christian way of life and there is no mention of it in Christ’s teaching”.  Some may consider this rhetorically hyperbolic and even theologically dangerous.  Isaac is contrasting a certain view of “justice” with God’s actions towards humanity.  He articulates this point by asking several questions:

“How can you call God just when you come across the Scriptural passage on the wage given to the workers? ‘Friend, I do thee no wrong: I choose to give unto this last even as unto thee. Or is thine eye evil because I am good?’ (Matthew 20:13-15). How can a man call God just when he comes across the passage on the prodigal son who wasted his wealth with riotous living, how for the compunction alone which he showed, the father ran and fell upon his neck and gave him authority over all his wealth?”

Isaac rejects that mercy and justice should be held together in tension, because the mercy of God triumphs justice.  He emphasizes that justice is “equality of an even scale, for it gives to each as he deserves”.  If God were truly just, then all would be doomed to death.  Isaac challenges those around him to “remember that Christ died for sinners, not for the just”.  Christ’s death was an act of mercy,  not justice.  Mercy, as Isaac defines it, “is a sorrow and pity stirred up by goodness.”  St Isaac sees that these definitions conflict, which led him to conclude that “mercy is opposed to justice”:

“As a grain of sand cannot counterbalance a great quantity of gold, so in comparison God’s use of justice cannot counterbalance His mercy.  As a handful of sand thrown into the great sea, so are the sins of all flesh in comparison with the mind of God.  And just as a strongly flowing spring is not obstructed by a handful of dust, so the mercy of the Creator is not stemmed by the vices of His creatures.”

He also views certain views of justice as an excuse for certain ‘zealous’ people to condemn others.  According to St Isaac, Christians have not been appointed to bring justice to the world, but “rather to ask for mercy for the world, to keep vigil for the salvation of all, and to partake in every man’s suffering, both the just and sinners”.  He teaches that Christians ought to “put the lover of justice to shame by your compassion”.  Since human nature is supposed to reflect the Divine, mercy should also triumph justice in between humans as well.

Unfortunately, humanity often fails at reflecting any true mercy.  Many seek justice under the guise of righteousness.  This also has theological implications: some preach hell as God’s ultimate justice, in Isaac’s negative definition of the phrase.  God becomes an avenger for righteousness, allowing his justice to flow without mercy.  St Isaac denies such notions:

“But the man who chooses to consider God an avenger, presuming that he bears witness to His justice, the same accuses Him of being bereft of goodness. Far be it, that vengeance could ever be found in that Fountain of love and Ocean brimming with goodness!”

Instead, the aim of God’s design is the restoration of humanity.  In this way, St Isaac asserts (what seems to us) a radical view of hell:

“[T]hose who are punished in Gehenna are scourged by the scourge of love. Nay, what is so bitter and vehement as the torment of love? I mean that those who have become conscious that they have sinned against love suffer greater torment from this than from any fear of punishment. For the sorrow caused in the heart by sin against love is more poignant than any torment. It would be improper for a man to think that sinners in Gehenna are deprived of the love of God. Love is the offspring of knowledge of the truth which, as is commonly confessed, is given to all. The power of love works in two ways: it torments sinners, even as happens here when a friend suffers from a friend; but it becomes a source of joy for those who have observed its duties. Thus I say that this is the torment of Gehenna: bitter regret.”

In other words, hell is the presence of God’s love felt in a negative manner.   According to St Isaac, hell is not full of God’s anger, justice, or divine retribution.  Rather, God’s intention for punishment stems from love, “seeking to make whole His image”.  Those who turn away from God’s love suffer as “a friend suffers from a friend”, twisting the heart and torturing the mind.  This pain is rooted in the sinner’s response to love, not love itself.

The book of Hosea uses the strong and explicit imagery of Israel, as a cheating wife, turning away from God.  Though Israel kept turning to Baal, God responded with love: “And I will take you for my wife forever; I will take you for my wife in righteousness and in justice, in steadfast love, and in mercy. I will take you for my wife in faithfulness; and you shall know the Lord” (Hosea 2:19-20).  Though there are dangers of taking this image too literally, we can view our own individual and corporate relationship with God as akin to marriage.  St Paul picks this imagery up in Ephesians: Bride and Groom, Church and Christ.  Infidelity on our part causes us pain because we know we have a faithful spouse.

Isaac’s view of hell as a place of God’s love, though a “scourging love”, challenges many ancient and modern Christian illustrations of hell.  This challenge does not come from a desire to make hell more acceptable.  While we may not accept all of St Isaac’s points, we must carefully consider his challenge to us.  It is a challenge to believe in God’s love, to consider what it means to believe that God is love.  Is “justice” an acceptable category when discussing God’s interaction with the world?  Is hell a place where God pours out his wrath?  Do we truly believe that God’s love pervades all things, including hell?